50 years since Sicily’s earthquake, an urban disaster of a different kind

When a quake devastated Sicily in 1968, a bold plan was hatched – to build entirely new towns and move the inhabitants. But what looked futuristic on paper would herald a new decay

Fifty years ago, the ground began to shake in Poggioreale, an ancient village in the Belìce Valley of south-west Sicily.

Calogero Petralia was eating spaghetti with his family, just as he did every Sunday lunch. By the time the initial earthquake and the aftershocks that night had quietened, the house where Petralia was born and raised was gone. It was 15 January 1968 and he was 18 years old. “My heart remained in that room,” he says.

Measuring 6.1 on the Richter scale, the earthquake was one of the most powerful to strike Italy, killing 231 people in the valley, injuring more than 1,000 and leaving as many as 100,000 homeless. Four towns were razed entirely; Poggioreale was one of them.

Instead of rebuilding the houses in their original location, however, the Italian government tried something new. It hired well-known architects such as Franco Purini to design and build entirely new cities, from scratch, on different sites. 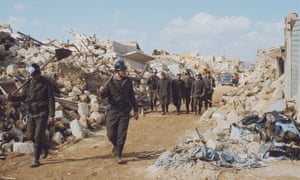 Italian firemen and rescue workers survey the ruins of Montevago, Sicily after the Belice earthquake in January 1968. Photograph: Rolls Press/Popperfoto/Getty

“Famous architects from all over Italy came to visit us,” says Petralia, now 68. “They told us how we had to build the new village. I took part in the work as a worker myself. We built hundreds of cement boxes, and one day they gave us the keys and said, ‘Here, these are your houses. This is your new town.’”

The brand-new Poggioreale – known as Poggioreale Nuova – was located four kilometres from the now-destroyed original. It was built according to a strange late-60s design aesthetic, including cement buildings with colourful columns and statues inspired by ancient Greece. The heart of it was Piazza Elimo, a square based on an agora and framed by a two-storey colonnade designed by Paolo Portoghesi, also responsible for mosques in Rome and Strasbourg and the royal palace in Amman.

We were victims of an urban experiment, imposed on us from the top

But while it was easy enough to move the people, it proved harder to transplant centuries of history, habit and tradition. Designed as a modern city around the automobile, Poggioreale Nuova lacked the courtyards and alleys where residents of the original Poggioreale would meet.

“The new Poggioreale did not belong to me,” says Calogero. “Those postmodern buildings were not part of my tradition. I felt like an immigrant, four kilometres away from my real home.”

Calogero Petralia, 68, shows a picture of Poggioreale after the earthquake, which struck when he was 18. He now lives in Poggioreale Nuova. Photograph: Umberto Santoro

He wasn’t alone in feeling isolated in his new surroundings. Many of the residents migrated abroad. Poggioreale Nuova was designed to accommodate 10,000 people, but whereas in 1950 it had 3,400 inhabitants, today there are only 1,400.

The piazza, conceived as an open-air mall, is now mostly deserted. The homes overlooking it sell for a pittance: a 100 sq metre apartment is on the market for just €15,000. The new Poggioreale, just like the old one, has become a ghost town.

“The truth is that we were victims of an urban experiment imposed on us from the top,” says the current mayor, Lorenzo Pagliaroli. “But cities cannot be rebuilt in a few years. The old Poggioreale was founded in 1642 and it took 300 years to model it, according to the habits of its people. The new Poggioreale was rebuilt in less than 15 years, without taking into account the traditions of its inhabitants. People used to live side by side and the town was full of gathering places. The neighbourhoods in the New Poggioreale were built far from each other. At the time, they didn’t need a car to go downtown or to visit a friend. Now they do.” 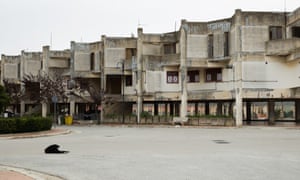 Poggioreale Nuova is now deserted for much of the day, frequented only by stray dogs. Photograph: Umberto Santoro

Certainly a lack of money was not the problem. The Italian government invested several billion euros over the years in reconstruction, but little on rebuilding those commercial activities destroyed by the quake. Grocery stores, workshops and farmhouses were destroyed, never to be rebuilt. The people had lost not only their homes but their livelihoods. “Our fathers needed work and investments to restart the economy destroyed by the earthquake,” says Pagliaroli. “The state instead gave us a modern work of art that did not belong to us.”

It was the same story in other settlements. Salaparuta, which today has 1,600 citizens, had twice as many before the earthquake hit. Gibellina, meanwhile, was rebuilt 20km from the original destroyed village, on land belonging to Ignazio and Nino Salvo, two notorious Sicilian mafia affiliates. But while the ancient settlement (founded by Arabs in the late Middle Ages) was transformed by artist Alberto Burri into one of the world’s largest works of land art – the rubble superimposed by boxes of reinforced concrete to create a labyrinth – the new town remains unfinished. Local estimates put the amount of money outstanding at €380m.

Although some towns held on to their inhabitants through the olive oil trade, one of the few successful industries in the valley, many settlements were bled dry. Sydney, Australia is home today to more than 5,000 citizens descended from people who left Poggioreale.

“The displacement of Gibellina and Poggioreale involved only buildings and streets,” says Maurizio Carta, professor of city planning at the University of Palermo. “But the traditions and lives of its inhabitants have not moved, and remain buried beneath rubble in the old city.’’ 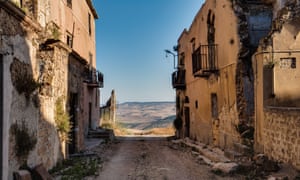 The ‘ghost town’ of Poggioreale is now a tourist attraction, more widely visited than the new towns that replaced them. Photograph: Andreas_Zerndl/Getty/iStockphoto

Today, despite Poggioreale Nuova’s lofty vision, it is the original Poggioreale that is proving most attractive. Thousands of tourists visit the “ghost town” every year, wandering among its roofless homes, where faded newspapers and magazines from 14 January 1968 can still be found peeking out from the rubble.

“The ancient Poggioreale, abandoned and forgotten, is one of the most extraordinary expressions of the concept of resilience,” says Carta. “Submerged beneath the ruins, it has waited patiently for history to revaluate it. It waited for someone to remember it, sooner or later. And that is exactly what has happened.”

Meanwhile, it is Poggioreale Nuova that feels like the real ghost town. After dark, stray dogs roam the square, older residents who once gathered to play cards now stay indoors, and there is a notable absence of young people.

Antonio Tusarolo, 36, is a potter and painter and one of the few younger people living here. “There is nothing here for young people,” he says. “The majority of my friends left to study and work somewhere else. We have no square or place to go. I wish I saw the old town before the quake. It’s sad for us not having had the chance to live in the ancient Poggioreale.”

“Youth are our last hope,” says Pagliaroli. “Without them, we are destined to disappear from the face of Sicily, like our beloved town that night 50 years ago.”